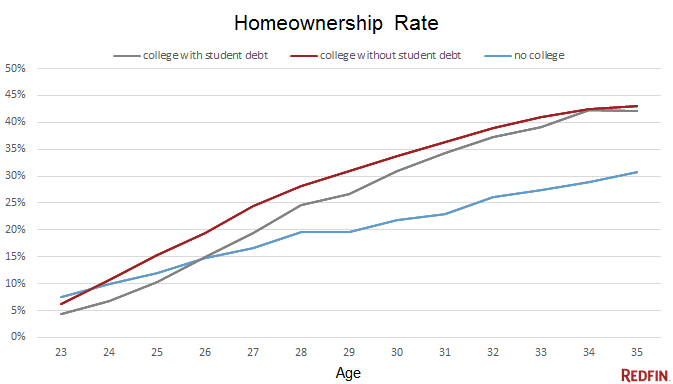 Its nearly impossible to find a millennial without student debt. The vast majority of recent college graduates walk out saddled with an average of $31,000 in student loans to pay back. I find that many of them automatically assume they cannot buy a home – but that’s not true. It isn’t the amount of student debt that would prevent someone from owning a home, it is the monthly payment amount and what impact that has on their debt to income ratio. Its entirely possible to buy a home while still paying off student loans! And, in a new study, it turns out that college graduates may actually be more likely to be homeowners.

If you or anyone you know is dealing with student loans but wants to quit throwing money into the black hole of renting, the below article is a great one to check out – and please let me know if I can answer any of your questions or help you begin you journey to homeownership!

“Is student debt hurting the housing market? Conventional wisdom and its pundits say yes. But the answer might not be that clear cut. A new analysis suggests that a college education does more to help than hurt homeownership, even it it means taking on debt.

The biggest gap in homeownership isn’t between grads with and without student loans, it’s between the education haves and have nots, according to economist Susan Dynarski, a University of Michigan professor and a fellow at the nonprofit Brookings Institution.

Homeowners with student debt buy their first house a little later in life, but by the time they reach 35, they’ve caught up with their peers who are loan-free, Dynarski found. But there’s a big, persistent difference in the homeownership rate of those with a college education and those without.

The finding is a fresh take on data from the Federal Reserve Bank of New York, where analysts have warnedthat the rising college debt burden has prevented young adults from buying cars and houses.

There’s no doubt student debt has ballooned enough to alarm the housing industry. This week, the National Association of Realtors made it a highlight of their annual legislative meeting in Washington.

Millennials are on track to be the nation’s most-educated generation, according to Pew Research Center. And in the past decade, the level of outstanding college loans more than doubled to $1.2 trillion, according to Rohit Chopra, a senior advisor at the Department of Education. The average indebted graduate has $29,000 in student loans.

Economists can disagree on what, if anything, those financial obligations are doing to the housing market, but there’s no doubt that first-time homebuyers have become scarce since the housing collapse. They currently account for less than a third of purchases, a low last seen in 1987, according to the Realtors association.

If millennials can’t afford to spend like grownups, what will happen to them and to the economy? Homeownership in the U.S. already is at a near-record low of 63.5 percent, a decline that’s been particularly dramatic for younger adults. For millennials aged 25 to 29, the homeownership rate is less than half the national average and falling.

There are signs that might be turning around. A survey from TD Bank found that nearly 40 percent of millennials will be looking to buy their first home in the next year, said Julian Castro, secretary of Housing and Urban Development.

“The American Dream of homeownership is as strong today as ever,” Castro said in a speech to Realtors. “And perhaps the best news of all is that millennials are showing that their generation is just as committed to homeownership as their parents and grandparents.”

Last month, the Federal Housing Administration took action, making it easier for homebuyers with student debt to get a mortgage. The agency also is working to make condo purchases easier to finance, which should help first-time buyers. And Congress and the White House are talking about ways to make college loans less of a burden.

“Seven million Americans are in default on a student loan, of course it’s going to be tougher for them to get a mortgage,” Chopra told Realtors. “We have serious work to do to fix what’s going on.”

Previous
Sprucing Up Before Selling!
Next
Have Your Neighbors Help Sell Your Home!

Thank you for contacting us, we'll get back to you shortly.

Sorry, we are unable to send your message at the moment. Please try again later.